Often dubbed as a food paradise, Hong Kong is home to an envious range of world-famous local delicacies. While many of these dishes suit the popular palate, there are also plenty of unusual ones that are more of an acquired taste. Today, let’s be adventurous and explore some of the weirdest yet most wonderful food that you can find in the city.

Not gonna lie—it looks funky, smells funky and tastes a bit funky. It even has an intimidating English name which, in fairness, doesn’t quite represent how it is made. But don’t be put off by century eggs! They are safe to eat and are nowhere near a century old! After all, they are just chicken or duck eggs preserved in a mixture of salt, lime and ash, which are then wrapped in rice husks for several weeks. Done properly, century eggs taste flavourful (akin to a strong brie) and complement congee very well. 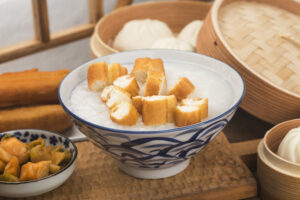 Did we just mention congee? Also known as ‘juk’, this dish looks like porridge. But don’t be fooled! It’s actually a highly adaptable savoury dish. Made of rice cooked to a thick porridge consistency, it can be eaten with various meats and seafood, or sometimes just on its own. Traditionally, this is a feel-good dish given to people to help them recover from illness. So, if you’re feeling unwell, you could do worse than grabbing yourself a nice steaming bowl of juk. 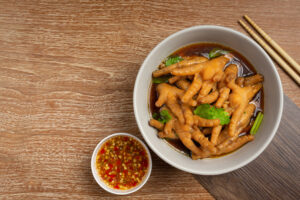 Chicken feet are ubiquitous. If you are no stranger to dim sum, you may have already heard of chicken feet. You can find chicken feet in many dim sum restaurants, though they are more often known as ‘phoenix claws’. Braised in a marinade of Chinese condiments, spices and cooking wine, chicken feet are a unique experience, both tender and chewy in equal measure. For those of you who try your best to look after your skin, you’ll be happy to learn that they’re also rich in collagen! 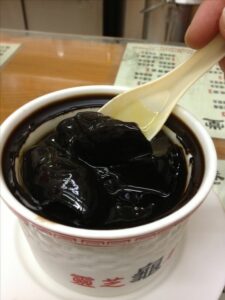 Turtle jelly is a jelly-like medicinal food that was traditionally made from a mix of herbs and bottom shells of turtles. To be frank, we’re definitely not a fan of the concept of consuming endangered turtles as food, and we don’t encourage it either. But the good news is: the turtle jelly nowadays no longer has turtle shells in it. Modern-day turtle jelly is made of a range of herbal products, such as ginseng and sarsaparilla. Black and bitter, it is often served with syrup and is widely thought to be a good remedy for acne outbreaks. 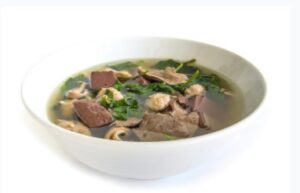 This may sound unappetising but stick with me here. Eating foods containing blood is hardly unique to Asia. England has black pudding, Germany has blutwurst (blood sausage) and here we have pig blood curd. Also known as ‘blood tofu’, it’s soft, smooth and slightly chewy, just like tofu. It can be eaten by itself or served in soup and hotpots.